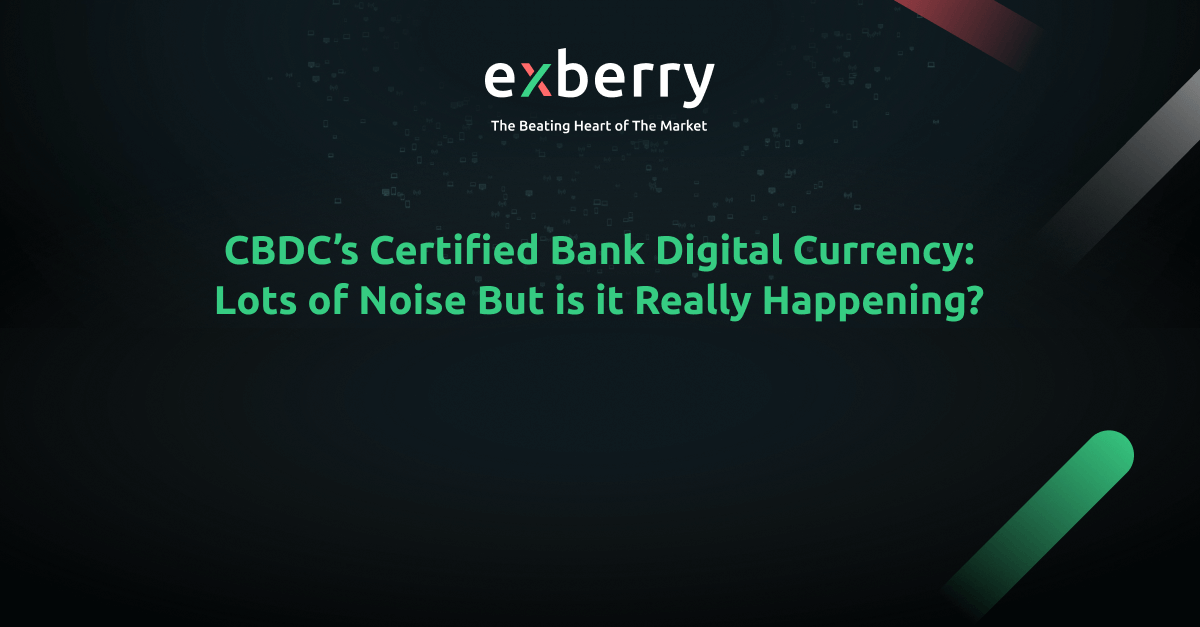 CBDC’s Certified Bank Digital Currency - a Lot of Noise But is it Really Happening? By Magnus Almqvist, Head of Sales at Exberry

Central bank digital currencies (“CBDCs”) are defined as a digital liability of a central bank that is widely available to the general public. In this respect, it is analogous to a digital form of paper money. In some respects, they are digital tokens, similar to what we all know as cryptocurrency, with the key difference being that they are backed by a central bank.


Many countries are developing CBDCs (Central Bank Digital Currency), and some have even implemented them. There are currently 9 globally who have this up and running and 100 that are seriously considering starting the process. Since so many countries are researching ways to transition to digital currencies, it’s essential to understand what they are and what they mean to society. More and more countries and central banks will establish one, and there’s a lot of noise around it. But will we really see it all come through? Is this just a trend taking place, or is this real? Will all banks eventually go digital with their own currency and what does that mean for everyone?

If a CBDC is widely adopted in a country, it raises very important questions about the impact on the financial system and its inner workings. Today, banks “create” money when they issue loans, and they are governed by capital adequacy regimes such as Basel III, to ensure they don’t “create” too much money and their liabilities build up to a level where they may run into problems. But if the central bank is issuing CBDCs directly to the consumer and businesses, this mechanism disappears or loses importance as business and retail can own central bank issued currency, which today is reserved to the banks. What does this mean for the financial system in a country? What will happen if the population swaps their bank deposits to CBDCs, in effect creating a bank run? Further to this, the Central Bank will potentially know where every single coin is and who owns it and have visibility into every transaction. What does this imply? What consequences will it have?

Introducing CBDCs is a strategic move for countries and has the potential to offer more resilience, safety, greater availability, and lower costs than private forms of digital money and indeed traditional fiat held with banks. This is certainly the case for digital currencies, especially when compared to unbacked crypto assets that are inherently volatile. If we dig a little deeper, we can see that cryptocurrency is not as strong for some important reasons. A stablecoin, that format is backed by the company that created them, can implode and fall to zero (as we’ve seen), simply because the creator gets into some trouble and cannot recover the value. This is exactly the kind of behaviour we saw in the early days of the USA, for example, in the West, banks issued their own money back in the 19th century, and they were in circulation for a while. Ultimately the bank got into trouble when they issued too much money, people panicked, ran away, and the banks went out of business, or the brand simply went out of fashion, rendering the money worthless.


We are seeing cryptocurrency markets go down daily, and although it isn’t necessarily a long-term drop, it is nevertheless very volatile. Regulated stablecoins may not be quite a match against a stable and well‑designed central bank digital currency. When a central bank issues a CBDC, it will be the safest option for consumers, and businesses.

The adoption is gaining momentum and there are over 100 countries that are seriously considering it, while other countries have been using digital currency for over 1 year now. Sweden’s Riksbank has developed a proof of concept and is now looking deeper into the technology and policy implications of CBDC. In early January of 2022, the Federal Reserve issued a report that noted that “a CBDC could fundamentally change the structure of the U.S. financial system.” Further to this, they note that “ It could also maintain the centrality of safe and trusted central bank money in a rapidly digitizing economy”.


Another factor or consideration and benefit to creating one is for those countries and regions where money is difficult to access. Financial inclusion is a worthwhile and important consideration that ultimately increases wealth and wellbeing. In more unstable regions, this can be the factor that holds and supports the economy and markets. Three active CBDC projects—in the Bahamas, China, and the Eastern Caribbean Currency Union—that they placed limits on holdings of CBDCs, again, to prevent sudden outflows of bank deposits into CBDCs. If we look at it a different way and draw a parallel to the use of crypto in Africa, we see many business contracts are now drafted in cryptocurrencies instead of the national currency. The ability to pay and receive using your mobile, and unfortunately not trusting your own government are key factors to the success of cryptocurrency as a means of payment in these countries.

In the U.S. and many other countries, many people do not have access to financial services. In the U.S. alone, a staggering 5% of adults do not have a bank account. In addition, 13% of U.S. adults have bank accounts but use expensive alternative services like money orders, payday loans, and check-cashing services. This is both unstable, and not money smart. CBDCs can help educate and secure the population, where money management and stability are not natural to them.


Privacy and balance are also a massive part of it. Countries want to protect their citizens and this can be the perfect use case for CBDCs, if implemented correctly. The balance will come as a result.

I believe that the subject of money is entering a new chapter and there are many new opportunities and potential for success for all markets. There is a lot of noise about CBDCs, and rightly so. There are many positives to creating one, and many opportunities for countries to build their value for their country and incoming trade, as well as strengthen the currency. CBDCs should be extremely easy to use, facilitate real time transfers and payments. As a consequence the integration into all types of online-based marketplace places are benefits that become streamlined and simple to process. Central bank digital currencies are not without controversy and there are many fundamental questions to address around consumer protection and anonymity and the role of commercial and high street banks, if CBDCs are adopted widely. What is clear is that the technology is here to stay and CBDCs are already in use in a few pilot cases, so expect that use to expand. The question is more about the phase and speed of adoption we will see over the next decade and how the vital questions about use and anonymity are addressed.

This website uses cookies to improve your experience while you navigate through the website. Out of these cookies, the cookies that are categorized as necessary are stored on your browser as they are essential for the working of basic functionalities of the website. We also use third-party cookies that help us analyze and understand how you use this website. These cookies will be stored in your browser only with your consent. You also have the option to opt-out of these cookies. But opting out of some of these cookies may have an effect on your browsing experience.
Necessary Always Enabled
Necessary cookies are absolutely essential for the website to function properly. This category only includes cookies that ensures basic functionalities and security features of the website. These cookies do not store any personal information.
Non-necessary
Any cookies that may not be particularly necessary for the website to function and is used specifically to collect user personal data via analytics, ads, other embedded contents are termed as non-necessary cookies. It is mandatory to procure user consent prior to running these cookies on your website.
SAVE & ACCEPT